Here is a great description of the school during the war years. Thanks to Paul Norman for finding this on the BBC - People's war site. Just an extract here about the school itself but the full article and context is well worth reading. An excellent piece about Doug Bukin and contributed by Elizabeth Lister. READ FULL ARTICLE HERE
http://www.bbc.co.uk/ww2peopleswar/stories/26/a4785726.shtml

Extract About Wyre Farm School in the War Years 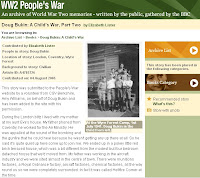 " I was then evacuated with about four other boys who'd been bombed out in the Coventry raid to a place called the Wyre Farm Camp School. It was near Cleobury Mortimer and adjoining the Wyre Forest in Shropshire. The camp consisted of about ten wooden dormitories, probably with about thirty or forty double bunks in them, with a hall and a refectory. It was originally built as and called an NCC site; we named it the 'Nazi Concentration Camp'! It was built for mainly itinerant agricultural workers before the war. For a while I was miserable and homesick. I would have been quite happy to go back to the bombs and so forth and go home but I settled in. My parents were able to visit one Sunday a month. We all had tuck boxes, and my mother always used to bring along my favourites: rock cakes. The rock cakes lived up to their name at the end of the month when they were rock hard. And a baking dish full of rice pudding - lovely! The parents were always invited to a roast beef dinner in the refectory, which was an enjoyable and rather rare luxury that they really appreciated. We spent our sweet ration at the school tuck shop. My friend and I were quite fed up with it and one day we tried to escape home on some 'borrowed' bicylces - 'stolen' would probably be a better word! We only managed to get as far as Kidderminster or Bewdley.
We were completely lost so we came back to the camp and nobody knew we'd escaped over the wire of Colditz, which was how we thought about our escape from the camp.
On a Sunday morning we'd have bacon and eggs. Everyone had a little notebook, all the kids had one, they wrote 'IOU one piece of bacon, IOU a glass of milk'. They'd always swap things that they did or didn't like. We bartered amongst ourselves. I loved milk, and in those day it was all full cream milk. At four o'clock in the afternoon, we'd all go into the refectory for a mug of milk. I loved it. I could have ten or twelve mugs of milk a day from the kids who didn't want their milk.
There was a little first aid place there as well. There was a nurse. Three or four of us caught mumps, and we ended up in an isolation dormitory.
The gates of the camp school opened out onto Wyre Forest which is a beautiful forest. It was lovely. One of the teachers took an interest in me. He was a butterfly collector and I expressed an interest in butterflies. He used to take me out, we'd get a net and a bottle of cyanide in those days, for killing the butterflies and putting them on a board. I probably know in wildlife more about butterflies than any other creature. I could recognise all of them from a picture and we collected about thirty-six or thirty-eight of the fifty-four species in that area. He gave me a tremendous background interest in nature. I thoroughly enjoyed that - it was lovely. You don't do it these days, you don't destroy wildlife, but we didn't know any better in those days.
It was a normal school. We'd have assemblies in the morning. There were communal showers which I hated. The big boys would always be slapping you with wet towels - big bullies! Then we'd have fairly frequent film shows in the hall, that was one of the entertainments. We were confined to camp. But on Saturday afternoons we were able to go into the local town Cleobury Mortimer, I always remember they had sugary sticky buns, and if you were lucky you'd get in and they'd have some. Spending my pocket money on them was wonderful I wish I could have one now! They were the best buns I've ever tasted. That was our afternoon escape. Sometimes on a Sunday we'd have a packed lunch and we'd all go out on a conducted climb of Clee Hill which was a steep hill: very close to and overlooking the Welsh borders. We'd climb to the top, and it was probably about seven or eight hundred feet high. I've been up since and it looks a lot smaller now than it did then! In the early autumn, September onwards, we would all have to go out into the field potato-picking. I hated that job. The tractor would go along and turn out all the potatoes in the furrows and we would have to go along picking them up. It was backbreaking work even for young people, putting them in buckets at the side of you. Then you got a penny or tuppence for a sack of these potatoes. I utterly hated that job, I really did."
Wyre Farmed at 10:13 PM
Share